This recognition is presented monthly and goes to the department in which the good catch occurred. Nominations for the award are taken from reported variances where a near miss is caught. Those variances are flagged for consideration of this award. A near miss is an incident or event that has occurred and had the potential to cause harm but was caught before it reached the patient. 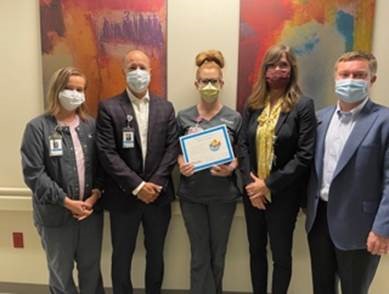 "Tierney noted that a patient was deteriorating and took action, ultimately identifying that the patient had a pulmonary embolism. Treatment was quickly provided, and ultimately her actions delivered a lifesaving outcome. Tierney’s attention to detail followed by action is a great example of a 'Good Catch.' If she had not taken action, the safety of the patient would have been at risk."

Congratulations, Tierney! Thank you for your commitment to keeping our patients and staff safe.